As part of the same project I wrote this python script for, I created an Excel/VBA script to allow our team to quickly and consistently input all of the data required for the VPN hardware we were shipping out to over 450 locations.  The output of this Excel spreadsheet would later serve as the input to the Python script I wrote, and combined they are working out very well.

Before I dive into the Excel/VBA code I’d like to give a little bit of background on my thoughts on why this was worth getting into.  From my experience, it’s fairly easy to come up with the configuration for a single site, or even a couple of sites.  You have the time to verify everything is correct, put everything in by hand, and really dedicate the time to check everything is how you want it.  This gets more difficult as you scale in size.  Even at 10 or 20 sites you start to increase your margin of error for a typo here or there, or you might run out of time and not be able to check everything as well as you would like.  Once you start to get into hundreds of devices to configure it makes things that much more complex.  It’s now very difficult, if not impossible, for a single person to manually configure each location and requires a very large amount of time dedicated to a single project.  If you take the time to automate a process, whether it is with a script, Excel, or some other combination of tools you can reduce the number of human errors as well as reduce the time and resources that would otherwise need to be dedicated to the project.

The project that led to this particular Excel VBA script required shipping out VPN hardware to over 450 locations.  Each VPN appliance was shipped to us by the carrier and was already assigned to a specific site.  There were a few different unique pieces of information, all in different spreadsheets that all needed to be tied together:

The different types of configurations for each site were important as they dictated what equipment and information would need to be set up for each site.  The three options were:

Doing any of the above manually would be very labor intensive, flipping between multiple spreadsheets to check the type of setup the site would have, figure out which information to record and ship out. So, we automate.

Prior to this project I hadn’t written a VBA script since middle school.  I ended up having to re-learn a number of things to write this script but in the end it was worth it.  It has a lot of similarity to a pivot table, with some added extras.  The idea behind the script is this:

Here’s some screenshots of what the tool looks like when run with a Broadband/Cell Site:

1) Start off by scanning the barcode of the VPN Appliance 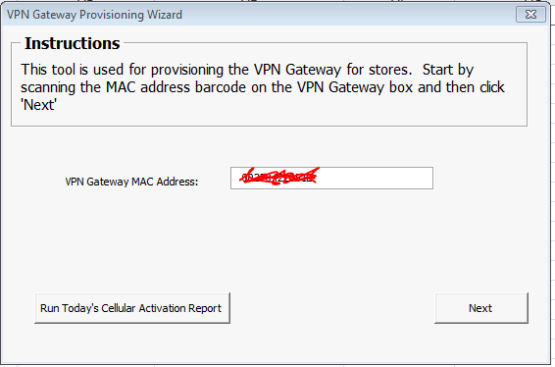 2)Prompt the user for the appropriate information so it can be saved to a database.

Detected this was a broadband/cellular site. Prompt the user for the appropriate information.

3)Present the user with all of the necessary information for that store so they can enter it into the VPN gateway.

Present the Broadband IP address information to the user for this specific site so they can enter it into the VPN hardware appliance.